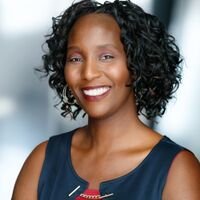 Leading at the intersection of diversity, inclusion, and workplace culture, in her role as Executive  Advisor and Diversity Strategist, Stacey Gordon coaches and counsels executive leaders on  DEI strategies for the business, while offering a no-nonsense approach to education for the  broader employee population.

Stacey’s book, UNBIAS: Addressing Unconscious Bias at Work debuted at #1 on Amazon’s  Hot New Release list and is also available at Barnes & Nobles, and wherever books are sold.  Stacey is the creator of the #1 course across the LinkedIn learning platform and has surpassed  more than 1 million unique learners overall. Her unconscious bias course has been translated  into at least four languages and she has worked with people managers and executive leaders  from companies such as American Express, ADP, Kia Motors, Hewlett Packard, Walmart, GE  and many others to deliver notable sessions that support their D&I efforts. She earned her MBA  from Pepperdine University Business School and her SHRM-SCP certification, as well as the  SHRM Inclusive Workplace Culture Credential.